Trans- is an interactive work that explores the idea of interdisciplinary studies in art. It uses visual
and sound as the basic elements for the work, as they are the two most basic elements that most artworks
deal with.
The work requires two users, one uses his voice and the other uses his hand movement. Through microphone
and joystick, the voice and the hand movement are translated into visuals. The visuals are projected in
forms of little creatures that move around and they move in different ways and speed. Creatures from one
user are different from the other user's in color and when the two different characters meet, they produce
a sound. 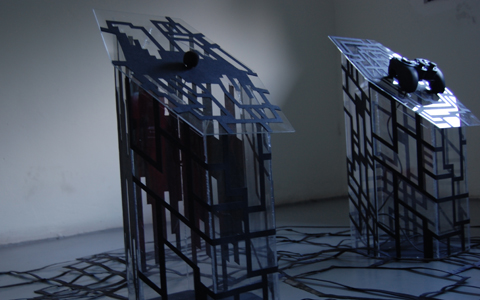